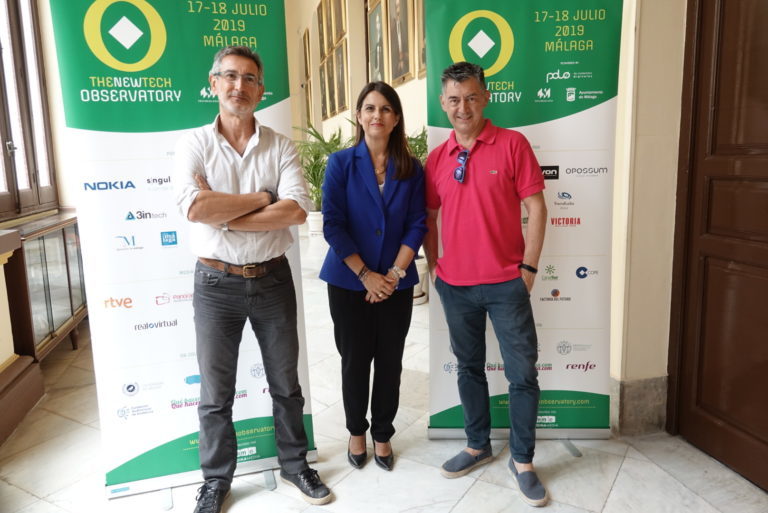 THE OBSERVATORY OF MALAGA CELEBRATES ITS THIRD EDITION, CONSOLIDATED AS THE MAIN MULTIDISCIPLINARY EVENT ON NEW TECHNOLOGIES IN SPAIN

The Councillor Delegate of Innovation and Urban Digitalization, Susana Carillo, and the CEO of Medina Media Events, Ricardo Medina, have presented this morning the program and activities of the third edition of the New Tech Observatory, which is held on Wednesday 17 and Thursday 18 July at the National Digital Content Hub. 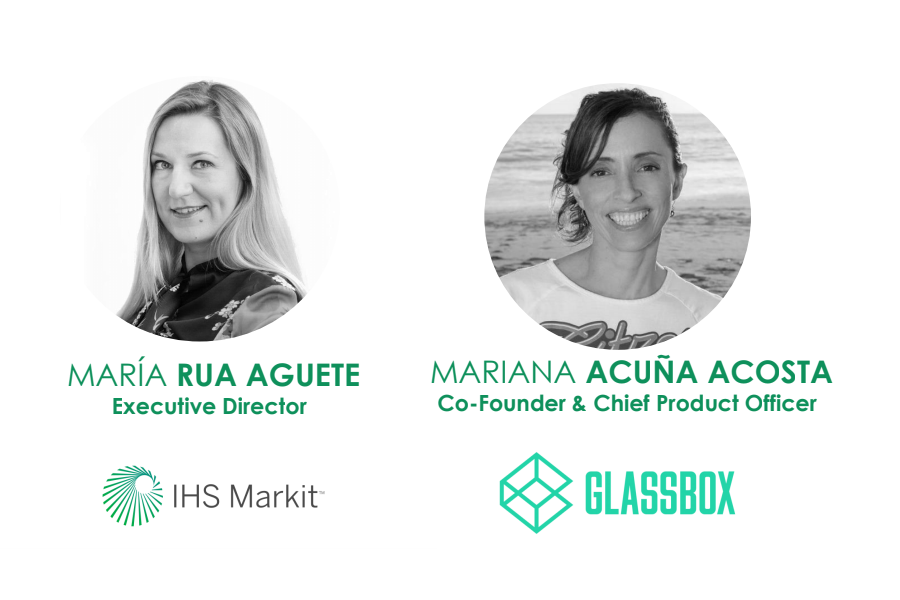 AN OVERVIEW OF NEW TECHNOLOGIES

In the first day, the Observatory will have the presence of two women experts in New Technologies: María Rua Aguete, from IHS Markit, and Mariana Acuña Acosta, from Glassbox Technologies.

From London, the Executive Director of IHS Markit, María Rua, will be in charge of opening the sessions of the Observatory, examining the role being played by the five major technology companies in the world (Facebook, Apple, Amazon, Netflix and Google) and will offer data on the “cloud gaming” market.

The British multinational IHS Markit, with more than 13,000 consultants worldwide, is one of the world’s leading consulting firms.

From California, the co-founder and Chief Product Officer of Glassbox Technologies, Mariana Acuña Acosta, will come to the Observatory to offer a conference on the latest developments in Silicon Valley in relation to Virtual Reality, Augmented Reality, Special Effects in Cinema and Artificial Intelligence. 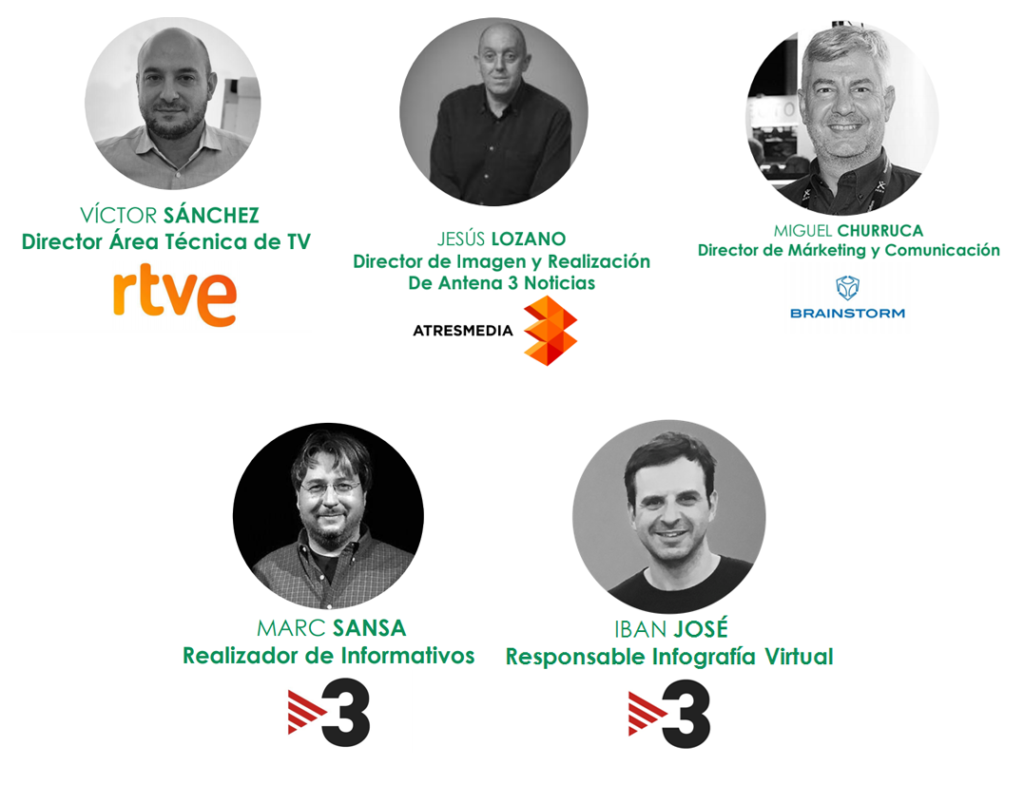 The thematic block of the televisions will be made up of professionals from RTVE, TV3 and AtresMedia, who will present their latest bets on Virtual Reality and Augmented Reality, above all, applied to their news programmes.

Víctor Sánchez, Director of the Technical Area of Television of TVE, will explain to the attendees of the Observatory of Malaga the bets that Televisión Española has made in the last months, especially in the informative programs, the electoral programs and El Tiempo.

Jesús Lozano, director of Image and Realization from Antena 3 Noticias, will explain to the attendees to the Observatory the experiences they have launched, both in the news of Antena 3 as in those of La Sexta, especially during the last election programs.

On the other hand, Marc Sansa, news producer, and Iban José, responsible for Virtual Infography of TV3, will be in charge of showing to the assistants the last virtual novelties of the Catalan television, which is leader of audience among all the autonomous televisions of Spain grouped in FORTA.

To complete this thematic block on VR/AR in televisions, Miguel Churruca, director of Marketing and Communication of the company Brainstorm, which celebrates 25 years in the world of television applying Virtual Reality, will talk about “Augmented Reality one2many: television and big events”.

The third edition of the New Tech Observatory of Malaga will also be dedicated to the applications of New Technologies in the medical sector. In this thematic block, presented by the Dean of the Faculty of Medicine of the UMA, José Pablo Lara, will participate the director of the Transplant Program of the World Health Organization (WHO), José Ramón Núñez, and the professor of the Faculty of Medicine of the University of Malaga (UMA), Francisco Sendra. 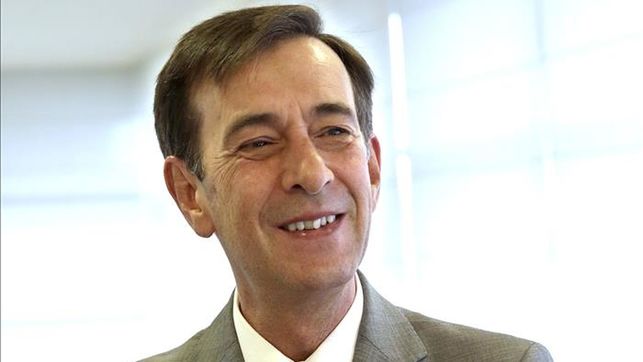 The use of drones to transport organs and medicines, 3D impressions to manufacture artificial implants (such as ears or noses), the benefits of Big Data, etc. will be dealt with by Dr. Núñez, who is also Head of Service at the San Carlos Clinical Hospital in Madrid.

Francisco Sendra, titular professor at the Faculty of Medicine of the UMA, who already participated last year in the Observatory, will explain the usefulness of the virtual 3D Second Life environment for learning in medicine, a technology that has already been applied to carry out radiology teaching activities with more than 1,600 undergraduate and postgraduate users since 2011. 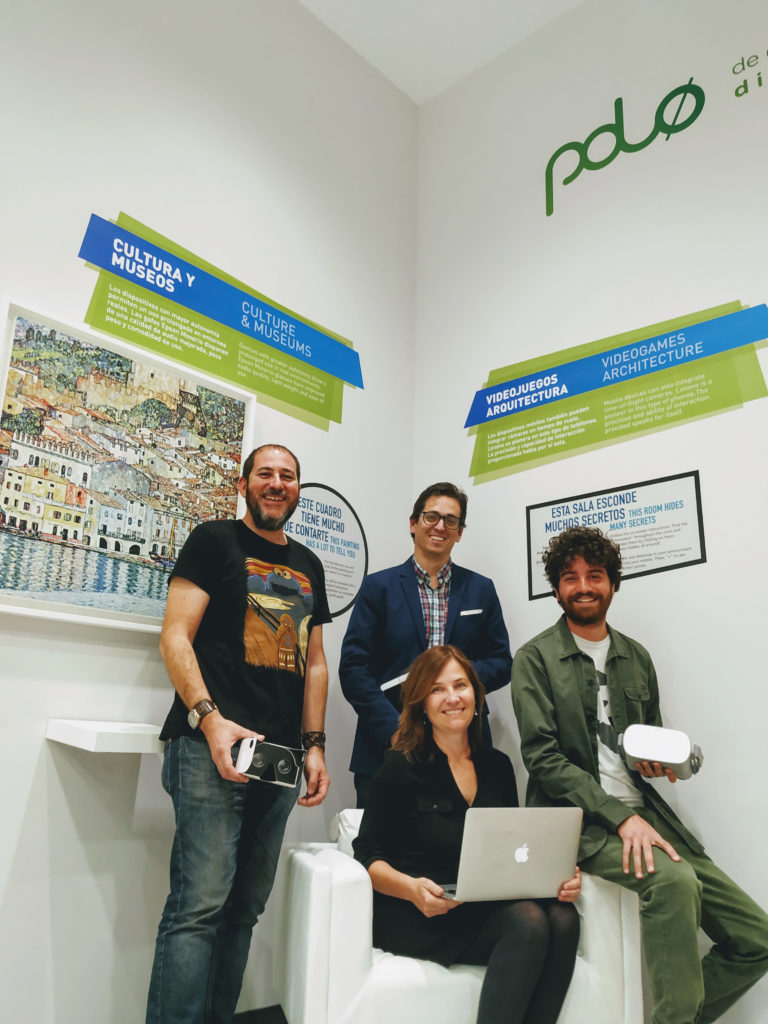 Four companies housed in the National Digital Content Hub: Mecenas 2.0, Feeel, 3IN-Tech and Krill Audio, will present their virtualization project of the Prado Museum, in which they have worked in collaboration with the Department of Education and the Digital Development Area of the Prado Museum.

The heads of these four companies will offer a panel to explain details of their star project, which can be enjoyed by attendees in the Demo Area of the Digital Content Hub.

The Qatar National Museum will also be present at the Malaga Observatory with SONO, which took part in the main worldwide museography project that has been carried out in recent decades, and which includes an impressive 45-screen interactive mural.

Francesc Sabata, Director of Operations at SONO, will explain at the Observatory the details of an emblematic global project, which he has been working on since 2017, which was inaugurated last March and was named “La Rosa del Desierto”. 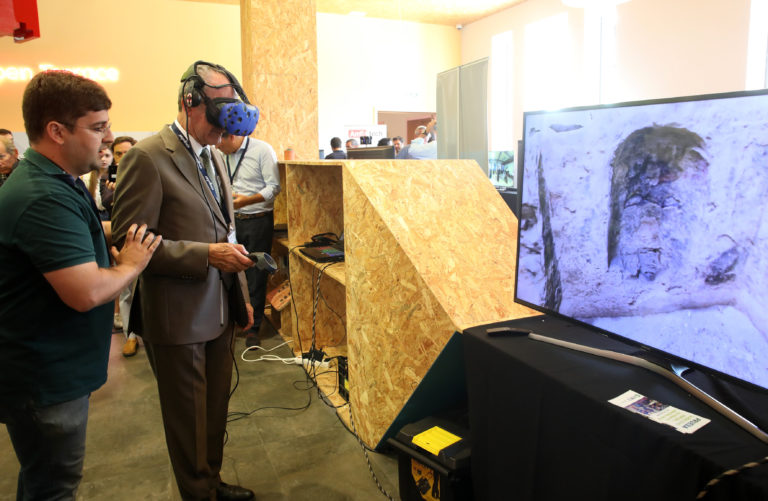 Gabriel Gonzálvez, CEO of Opossum Studios, will present in this new edition of the Observatory several projects worked with photogrammetry, as well as the doctoral work “State of Mind”, use and presence of light in the processes of contemporary aesthetic reception (Doctoral Program of Advanced Studies in Humanities, Department of History of Art of the University of Malaga).

For its part, the audiovisual multinational Lavinia will also join the Observatory to show its applications in museums and exhibitions. Ignasi Marcet, Director of Exhibit of Lavinia Next, will be in charge of telling the attendees of the Observatory everything that the group has already set in motion, thanks to New Technologies, in museums. 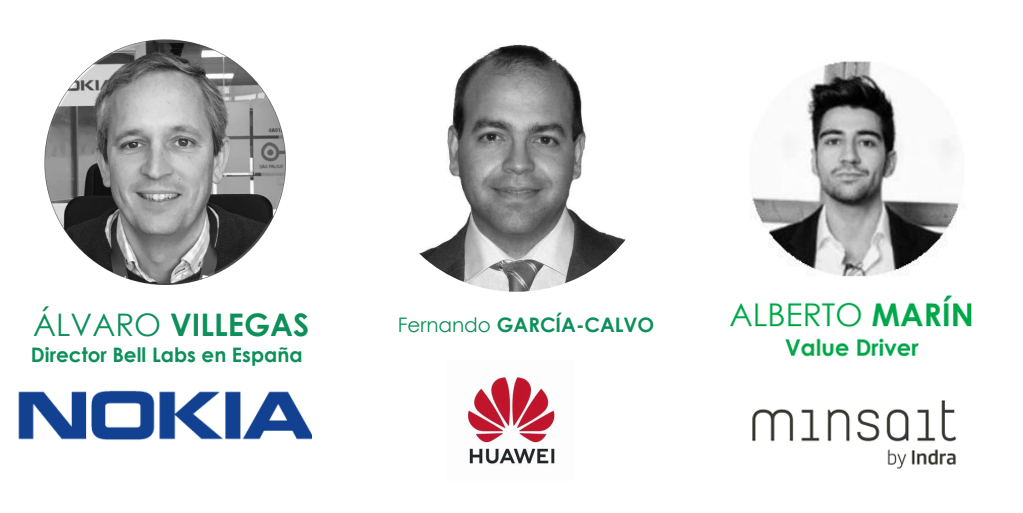 MULTINATIONALS BET ON THE OBSERVATORY

Fernando García-Calvo, from Huawei, will dedicate his paper to talk about the (re)volution of audiovisual content in formats such as mobile phones.

“The consumption of audiovisual content traditionally focused on large screens in the cinema, at home, now shares moments of consumption that generate new formats, new narratives and new production possibilities that are beginning to develop right now. We have in front of us an opportunity to create, distribute and interact with content adapted to new realities that are becoming more and more patent in society”, says García-Calvo.

Closing the block of New Technologies applications in multinationals, we will have the presence of Alberto Marín, Value Driver of Minsait by Indra, who will talk about immersive experiences in Digital Transformation. 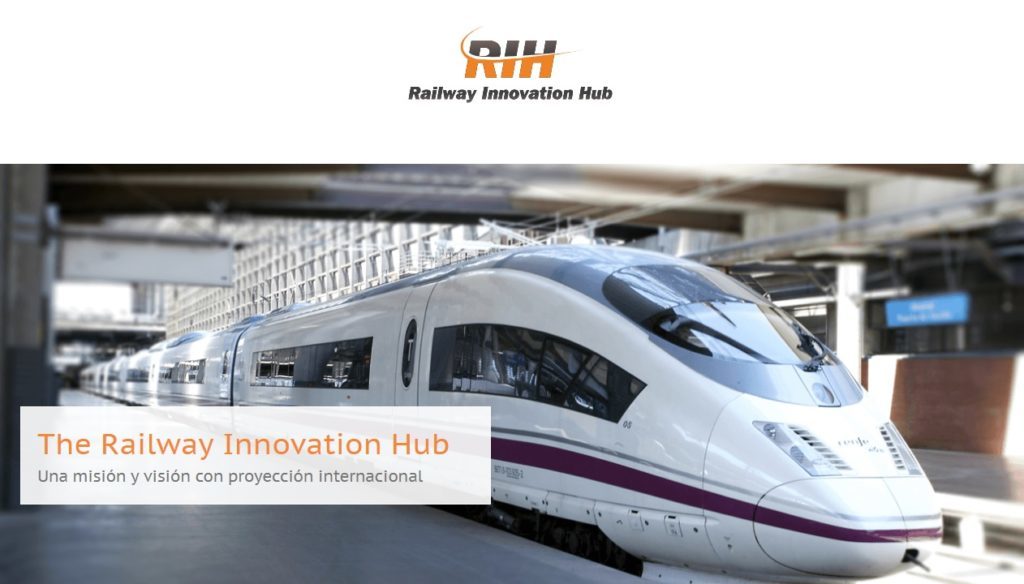 THE METRO AND NEW TECHNOLOGIES

The improvements carried out in the Metro, Train and Tram industries using New Technologies will be presented at the Observatory by José Antonio López de la O, Director of Technical Coordination at the Railway Innovation Hub (RIH). 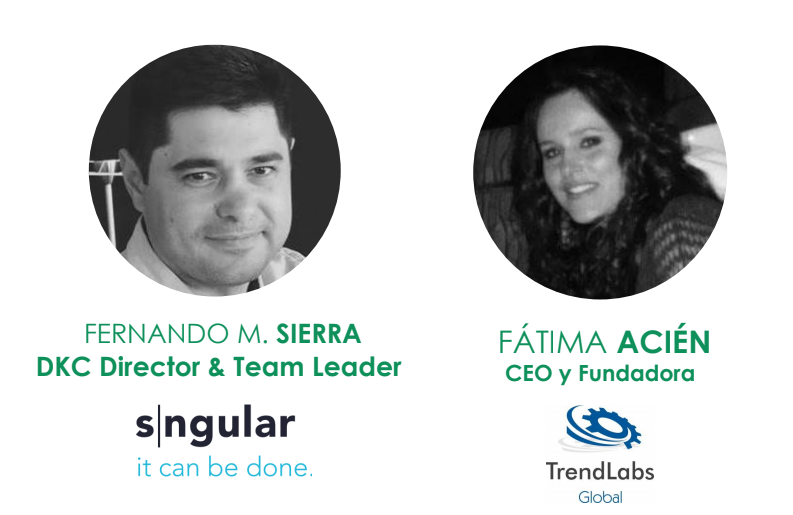 The applications of New Technologies in the Marketing sector will be analyzed by companies such as Sngular and TrendLabs Global.

On the one hand, Fernando Sierra, DKC Director and Team Leader of Sngular, will talk about GRAVITY.

Gravity is the amazing experience of living an entire theme park proposal in the most immersive way possible, using VR. In this talk, Fernando Sierra, will tell us how a classic idea of a Pitch is transformed into an incredible virtual stage where not only understand, but live, a business proposal.

Fátima Acién, CEO and founder of TrendLabs Global, will talk about the use of Hololens Augmented Reality glasses for applications in the marketing sector. 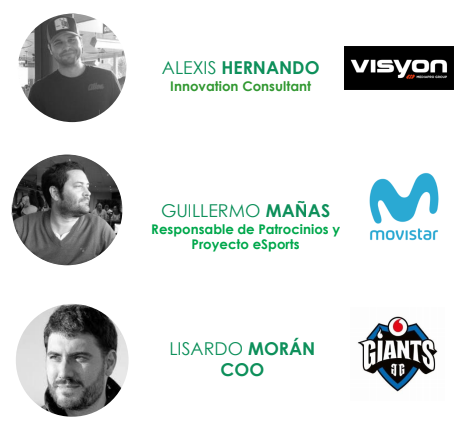 eSPORTS WILL APPOINTMENT AT THE OBSERVATORY

On the other hand, eSports leaders such as Movistar, the Vodafone Giants team and the company Visyon, will meet at the Observatory to jointly expose the state of the business of this entertainment industry that is causing furor among young people.

Guillermo Mañas, head of Sponsorships and Projects eSports Telefónica Spain, will share the steps that the Spanish multinational is taking, from its exclusive eSports channel, its Raiders team and its commitment to professionalization in the High Performance Center of more than 1,000 square meters they have in Madrid.

Lisardo Morán, head of Operations (COO) of the Vodafone Giants team, will explain the keys to the success of the team sponsored by the British teleco, which this year has reached 11 finals, has won 6 national titles and has formed a women’s team.

Alexis Hernando, Innovation Consultant of Visyon, will also participate in the thematic block dedicated to eSports with his paper “Immersive Technologies in eSports”. 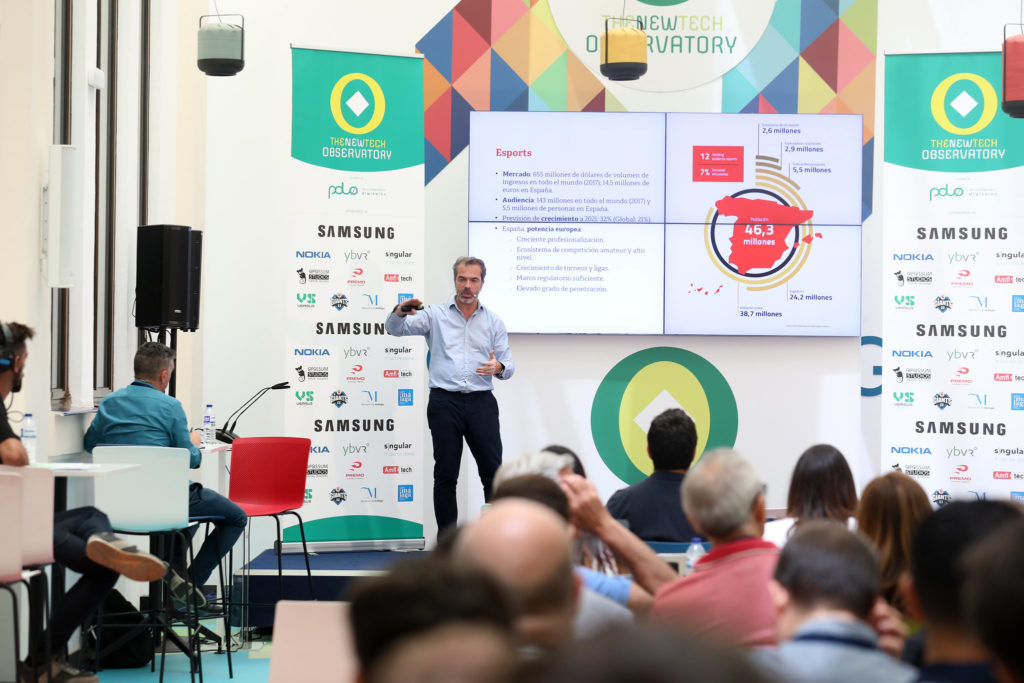 Following the line of videogames, the general director of the Spanish Videogames Association (AEVI), José María Moreno, will explain the responsible role that videogames should adopt.

Moreno will talk about the project “The Good Gamer”, which aims to disseminate responsible gaming measures. 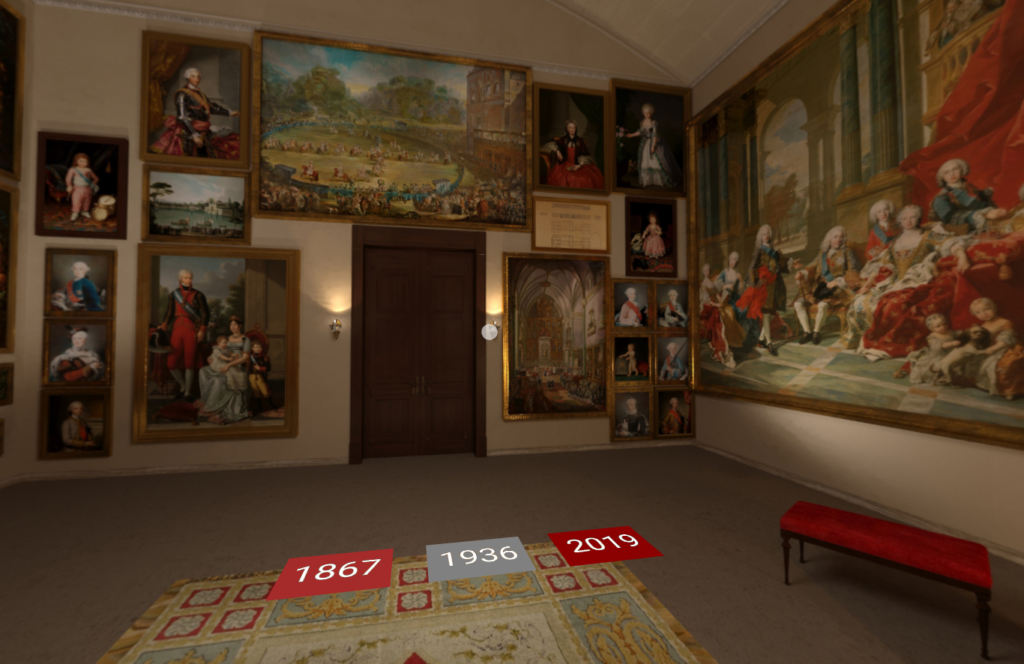 MORE THAN 25 DEMOS IN THE DEMO AREA OF THE OBSERVATORY

During the networking moments and cocktails, attendees will be able to walk around the Demo Area, divided into different spaces, in which participating companies will exhibit their new immersive experiences, video games, Serious Games, and so on.

Highlights include the virtualization demo of the Prado Museum that 3IN-Tech together with Mecenas 2.0, Krill Audio and Feeel have made. As well as a Virtual Escape Room that the UMA Chair has developed together with 3IN-Tech and Feeel and the Real Sociedad Matemática Española and a Fortnite championship in which different youtubers of Malaga will participate, organized by Sirocco Media, among many other demonstrations.

For its part, Nokia will explain through the gamification their work in Distributed Reality through the Escape Room “DROOM”, present their projects in immersive technologies in educational environments that is developing with the UAX and count the attendees in the Auditorium through an “cuentacaras”.

Sngular returns to the Observatory with one of the most popular demos of the last edition: CoolPaintr, where both adults and children can express their artistic talents in Virtual Reality. Another of Sngular’s demos will be a Virtual Reality experience for couples in which they will be able to compete in bowling.

Visyon will take to the Observatory Area Demo a multiplayer Augmented Reality experience that it has developed together with Vodafone. The game consists of eliminating some ords of robots that try to eat 5G energy by destroying nodes and feeding a central 5G node.

The company Opossum Studios from Melilla will present in the Demo Area different virtual experiences carried out through photogrammetry, such as, for example, the recreation of the Fuerte de Santiago, an archaeological site of Melilla.

In addition, more than 15 companies housed in the National Digital Content Hub will be exhibiting their work in the Observatory’s Demo Area on July 17 and 18, where attendees and visitors will be able to try out a multitude of immersive experiences and video games.

The New Tech Observatory of Malaga, with which the Malaga City Council collaborates (Promálaga and Digital Content Hub), will also have as collaborators the University of Malaga, the VRAR Association, COITTA/AAGIT, Fundación Audiovisual de Andalucía (AVA), Qué hacer en Málaga and Renfe.

As Media Partners the meeting will include RTVE, Panorama Audiovisual, Canal Sur, COPE and media specialized in New Technologies and Video Games such as Real o Virtual, Jugón Virtual and Factoría del Futuro.

The New Tech Observatory of Malaga will gather in this new edition 250 exclusive attendees who will be able to enjoy in first person more than 25 keynotes and more than 25 demos offered by the companies participating in the event.