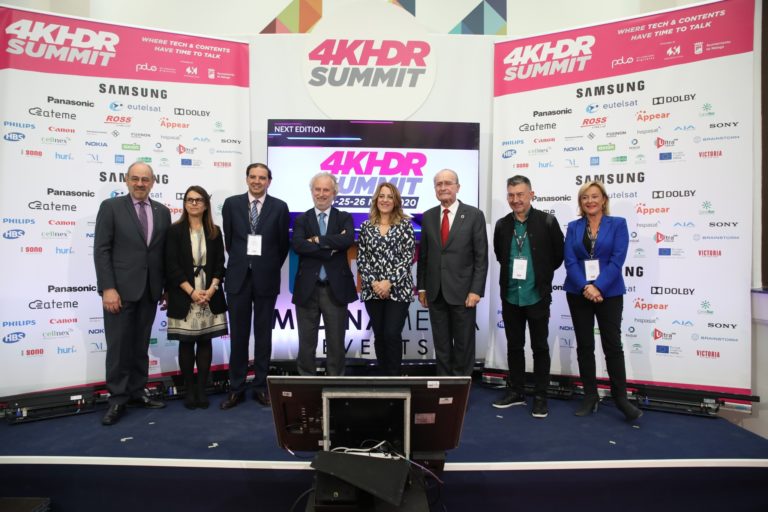 THE MAYOR OF MALAGA CLOSES THE 4K-HDR SUMMIT, WHICH HAS ALREADY ANNOUNCED NEW DATES FOR 2020

The fifth edition of the 4K-HDR Summit, which was held on November 6, 7 and 8 in the Digital Content Pole of Malaga, ended with the closing ceremony by the Mayor of Malaga, Francisco de la Torre, who stressed his commitment to “continue to make Malaga grow as technological capital of world reference”.

For his part, Ricardo Medina, CEO of Medina Media Events, has announced the dates of the next edition of this international summit. The 4K-HDR Summit will once again bring together professionals, companies and multinationals from all over the world on November 17, 18 and 19 2020 in the capital of the Costa del Sol. 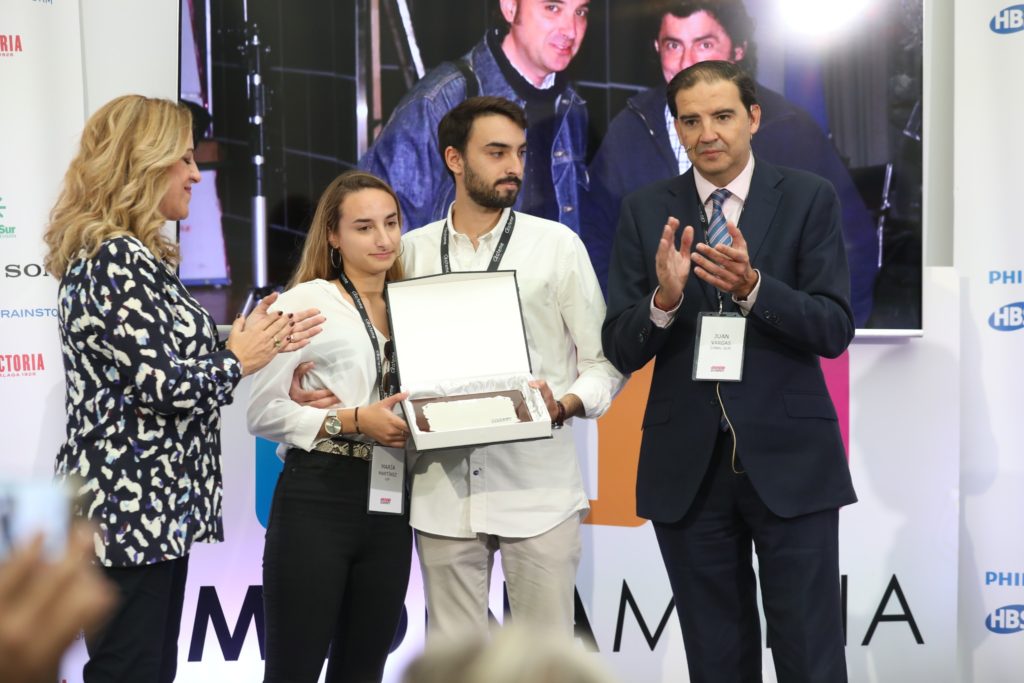 The closing ceremony took place after the emotional tribute to Luis Martínez, director of Programmes of Canal Sur TV in Malaga, who died today in a traffic accident.

Juan Vargas, Innovation Director of Canal Sur, together with Montserrat Naharro, Territorial Director of Canal Sur Málaga, have been in charge of giving Luis Martínez’s children a commemorative plaque to the applause of their colleagues, who have not hesitated to attend the tribute that since the 4K-HDR Summit has wanted to pay to a beloved person in the audiovisual sector as was Luis Martínez. 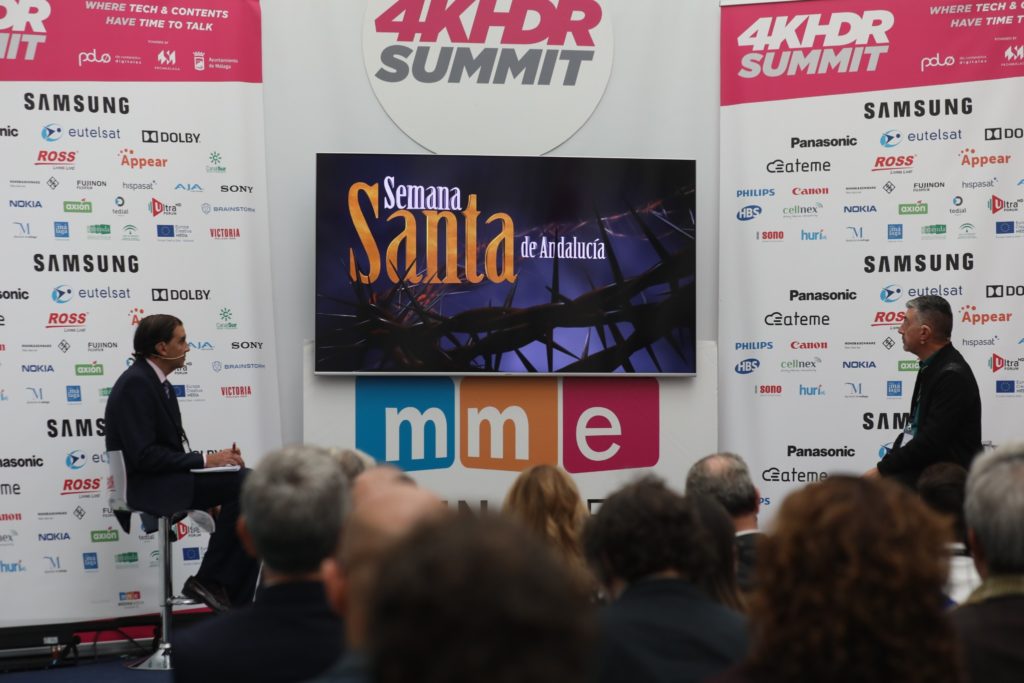 Juan Vargas, together with Ricardo Medina, CEO of Medina Media, has also reviewed the 5 years in which Canal Sur has been betting on 4K productions that bring the traditions and culture of Andalusia closer to the world: flamenco, Cadiz Carnival, Holy Week, El Rocío, and other productions related to social responsibility, such as the documentary on Homosexual Memory, made by Medina Media 4K. 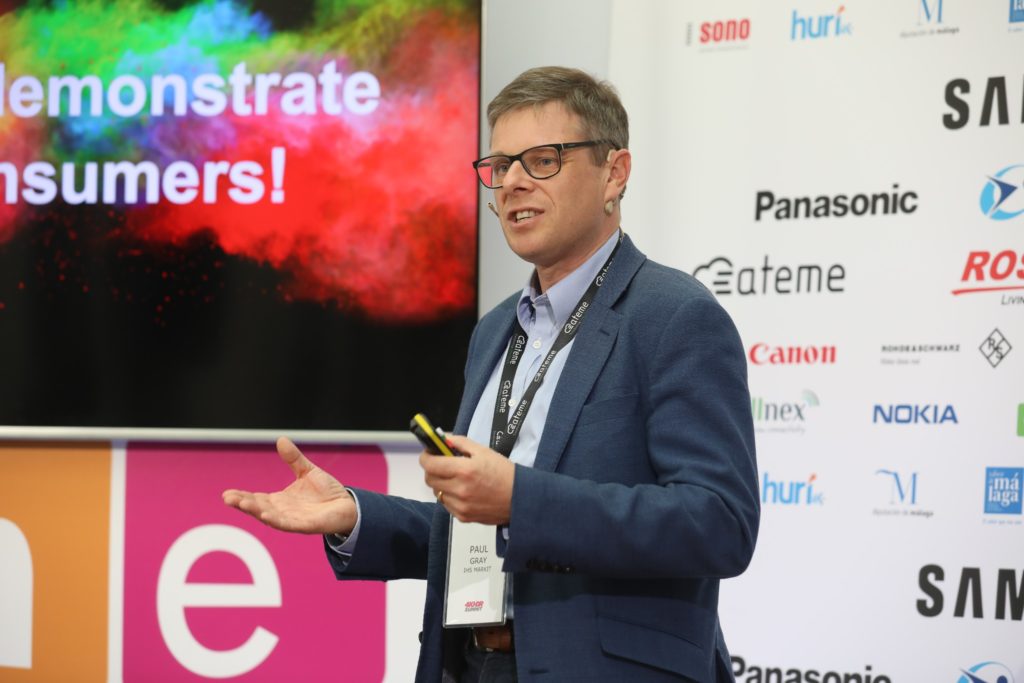 On the morning of the third day of the 4K-HDR Summit there was also an analysis in the form of conclusions on the 24 keynotes and 4 panel sessions that Paul Gray, senior analyst at IHS Markit, offers to the auditorium each year, as is customary.

Gray pointed out that “the sound at UHD is improving and is really the success of UHD” and that “UHD is the only medium capable of capturing spectacular images like NASA’s”.

He also commented that “the filmmaker mode will mark a before and an after and will teach us how we have to do things” and that “there is still a lot to do and to share”. 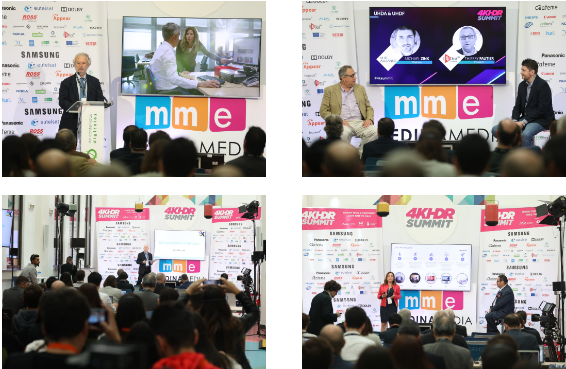 THE ADVANTAGES OF 5G FOR 4K-HDR

Juan Pachón, Technical Sales Manager of Rohde & Schwarz (Germany); and Inés Sanz, Customer Engineering Manager of Hispasat, have participated in a panel about the opportunities that 5G offers to 4K transmissions.

“Thanks to its greater power, capacity and speed, and with practically no delay, 5G opens up endless possibilities for exploiting audiovisual content, especially high quality content in Ultra High Definition (UHD)”, “Satellite is the most efficient medium for broadcast and multicast”, commented Inés Sanz.

THE GIANTS OF THE CONSUMER MULTINATIONALS REPRESENTED BY 8KA

Richard Moreton, from Samsung Electronics Research Institute UK, on behalf of the 8K Association (8KA), spoke about the maturation of the 8K ecosystem and its creative value within the current landscape of device manufacturing and Ultra High Definition content production: “The 8KA wants to respond to the concerns of the 8K system, both professionals and consumers.

Rafael Porras, president of Canal Sur, offered a greeting, in which he stressed that “we want to build an Andalusian radio and television of the future”. “For us it is fundamental that Andalusian television and radio be the engine of the audiovisual industry”.

Michael Zink, Chairman of the UHD Alliance and Thierry Fautier, President of the UHD Forum, took part in a panel session on UHDA and UHDF.

Michael Zink presented the Filmaker Mode. From the UHD Alliance they have been working together with about 400 creatives to develop the “Filmaker Mode”.

The Filmaker Mode consists of being able to change the configuration of the TV screen to cinema mode and is the best way to watch movies and series in the home. This initiative allows the creativity of filmmakers to be safeguarded.

The manufacturers that have joined the Filmaker Mode system are LG, Panasonic and Vizio, and the UHD Alliance is also working with other manufacturers to join this initiative.

For his part, Thierry Fautier, president of the UHD Forum, stressed that the UHD Forum is betting on supporting the deployment of HFR, DM HDR, NGA Object based and CAE and guiding the industry towards 8K, among other initiatives. 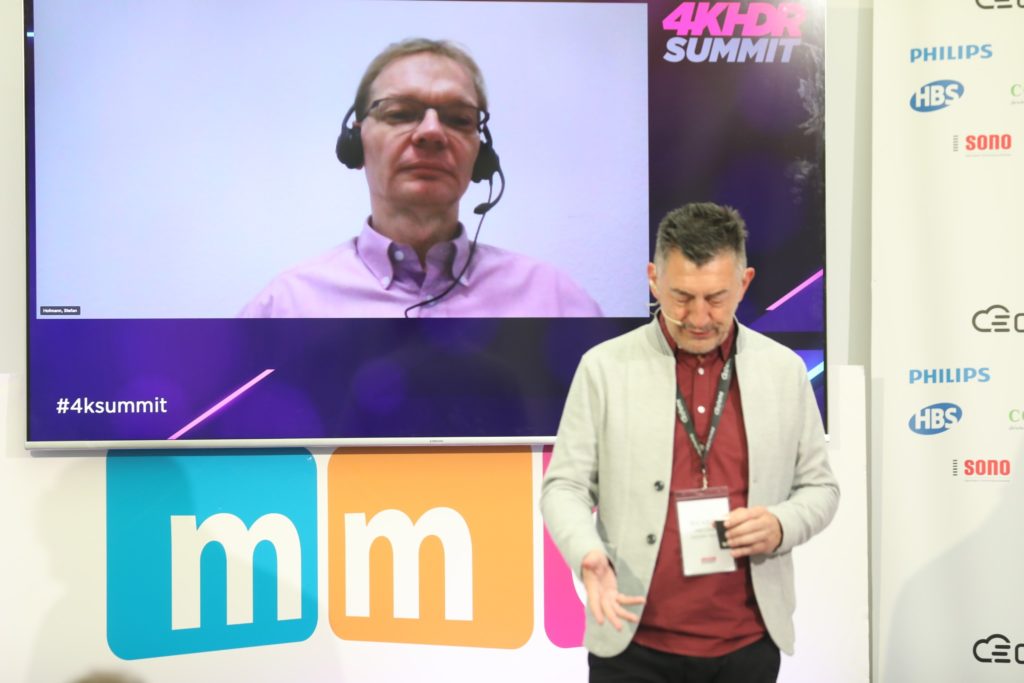 8K CAMERAS, LATEST SOLUTIONS AND THE TRIBUTE TO TONI FELIU (PANASONIC) ON THE SECOND DAY OF THE 4K-HDR SUMMIT

One of the highlights of the 4K-HDR Summit was the presentation by Stefan Hofmann, Manager Sales Engineering Live Operation at Panasonic.

Panasonic’s relationship with the Games goes back 26 years. Over the past 13 Summer and Winter Games it has provided technology (display security, PA projection and broadcast) and audiovisual services to the organization.

Throughout this history some milestones were set in this industry such as the use in Nagano’98 of the first video cameras with an optical connection of up to 20 km. (which were not commercialized due to anti-dumping policies).

The appointment of Salt Lake City in 2002 meant the jump from SD to HD with the first video format of 1/4 inch. Coinciding with Turin 2006, Panasonic previewed its popular P2. In the case of the London Olympics in 2012 was the first tests in 4K and 3D.

Looking to the future, Tokyo 2020 will mean the irruption of the 8K (in simultaneous broadcast with 4K) and the use of the cloud for ENG contribution. 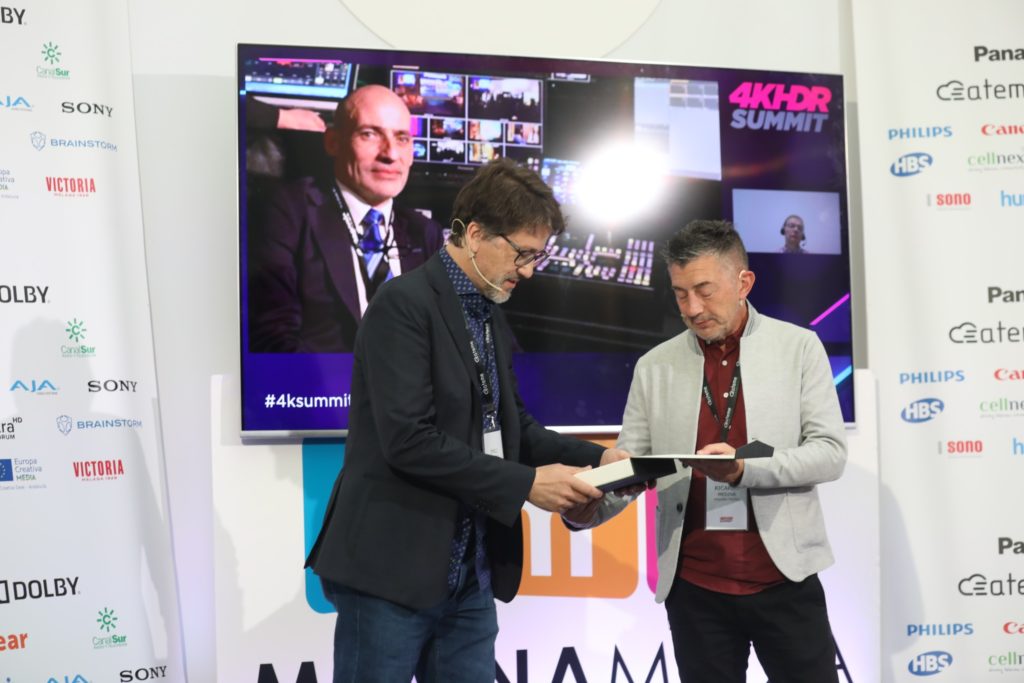 Following Stefan Hofmann’s videoconference intervention, the event organisers wanted to pay tribute to Toni Feliu, Stefan’s companion in Panasonic, by presenting a commemorative plaque to Emili Planas, who will send it to the family of the recently deceased. Toni Feliu was a beloved companion in the audiovisual sector and a regular attendee at the 4K-HDR Summit.

The second day continued with the panel where Carlos Castán, Industrial Products Manager Broadcast and Cinema Dept. de Canon; and Salvador Luna, Optical Devices Manager of Fujinon (both Japanese multinationals), who have shared the success stories of both companies.

After the greeting of Víctor Muñoz, Vice Chancellor of Strategic Projects of the University of Málaga (UMA), it went to the universities.

José Manuel Menéndez, Full Professor at the Universidad Politécnica de Madrid (UPM); together with José Manuel Sanz, Multimedia Engineering Department of Cellnex, he presented the Ultra High Definition (UHD) Chair they are carrying out together with RTVE.

On the other hand, the writer Francisco José Espinosa, representing Tilano TV, spoke about the “4K for beginners”.

The second day of the 4K-HDR Summit ended with a toast offered by Cerveza Victoria de Málaga.