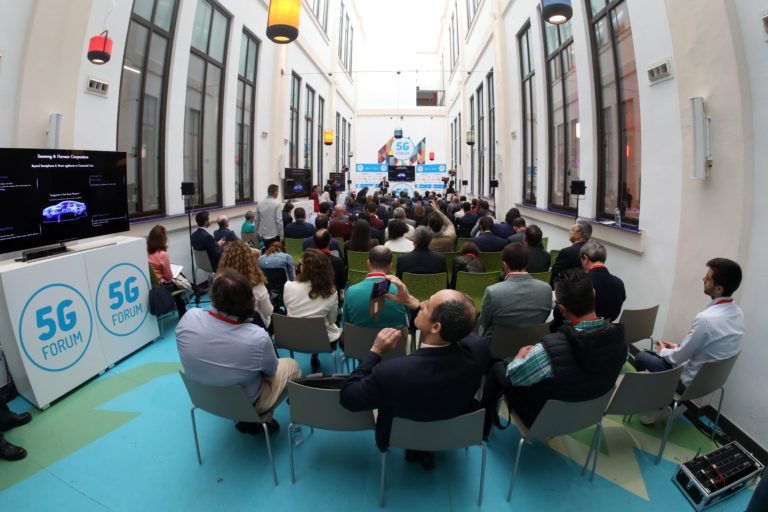 The first edition of the 5G Forum achieved a triple objective: to offer the best agenda of speakers ever gathered in Spain on the 5G, to become a technological networking point of first level and that the 250 executives representing more than 100 companies opened new business opportunities.

For two days, on April 25 and 26, 2017, the Digital Content Hub of Malaga was the scene of the first multidisciplinary meeting on 5G that has been held in Spain on 5G technology.

Ricardo Medina, CEO of Medina Media, organizer of the event, announced in the closing ceremony that the second edition of the 5GForum will be held on April 24 and 25, 2019 to continue examining annually the evolution of this technology, which opens the possibilities of connectivity to many fields, beyond telephony.

“The 5GForum will maintain its family event spirit (not massified) to continue being the meeting point for the presidents, general directors, directors, experts, professionals and researchers of the 5G in an environment where they are at ease and contacts flow to do business,” said Medina. 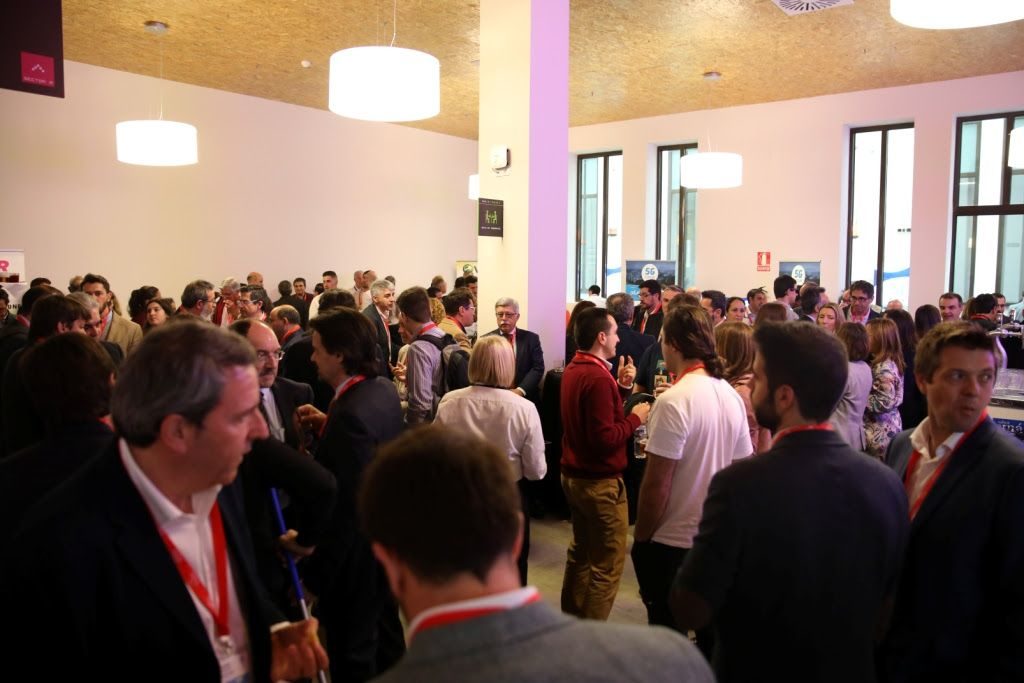 Companies such as Samsung, Nokia, Cellnex, Axión, Hispasat, RTVE and Les Roches, among others, sponsored this pioneering meeting in which the top 5G experts from multinationals such as Telefónica, Vodafone, Orange, Ericsson and SEAT also participated. 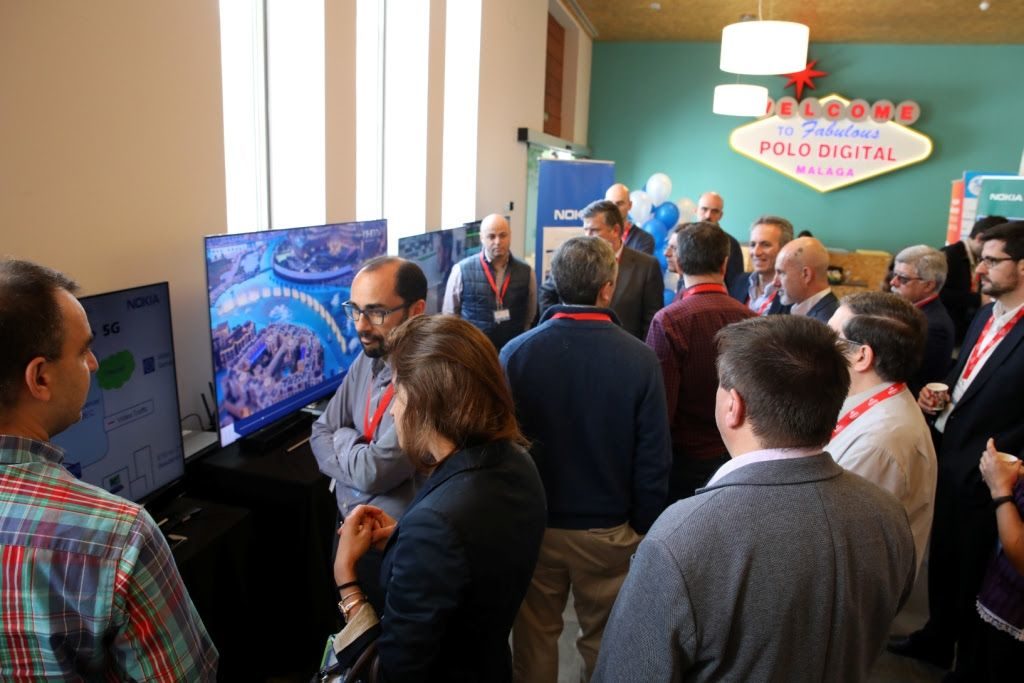 The 5G Forum started in the Digital Content Hub with the visit of the Mayor of Malaga, Francisco de la Torre; the Minister of Employment, Enterprise and Trade, Javier Carnero; and the Director General of Red.es, José Manuel Leceta.

Francisco Hortigüela, Director of Institutional Relations, Communication and Corporate Citizenship of Samsung Spain, was responsible for opening the presentations and explained the importance of 5G for unlimited data and even to drive a car in the immediate future.

Jorge Alberto Jiménez, Executive President of Axión, stated that “the Fourth Generation (4G) still has life. However, the one that is about to arrive will coexist much more with us than its predecessor, since its possibilities are practically unlimited”.

Inés Sanz, Head of Customer Engineering at Hispasat, highlighted that “the 5G requires the inclusion of the satellite to get Internet for everyone and anywhere. The satellite is wireless, as is 5G”.

Óscar Pallarols, Director of Innovation and Product Strategy of Cellnex Telecom, stressed the need for fiber to optimize 5G and highlighted the speed of new technologies: “When we see the first real application of 5G in Spain, we will start talking about 6G.

For his part, the President of Nokia in Spain, Ignacio Gallego, announced that they will cover the Moon next year, in collaboration with NASA, coinciding with the 50th anniversary of the Apollo XVII space mission in 2019. 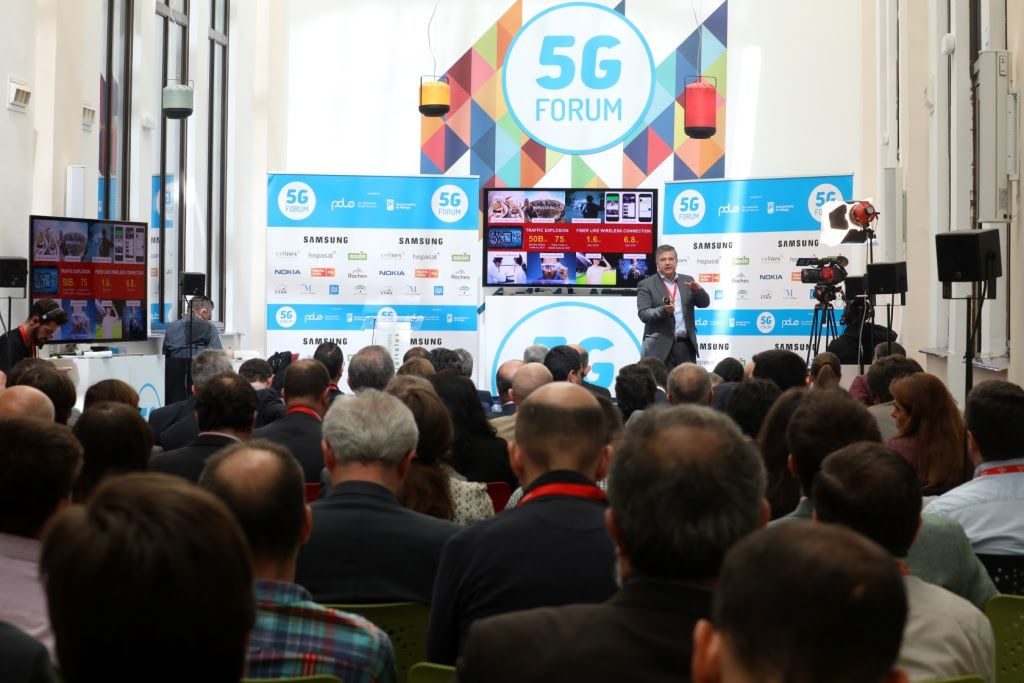 The three main operators in the 5G Forum

Telefónica, Vodafone and Orange, the three major operators in Spain, were represented by their leading experts in 5G.

Javier Gutiérrez, Telefónica’s Director of Network Strategy and Development, explained that “it is essential to develop use cases, such as Virtual Reality, Industry 4.0 or connected cars. So that when the 5G technology arrives, the consumer already has a demand”.

Didier Clavero, Network Director of Vodafone Spain, reflected on “the era of connected objects” and the importance of data flow for this to be possible. “It would be a failure if we just keep on providing the same services that we give now.

Tomás Alonso, Head of Product Engineering at Orange, surprised everyone by saying: “If today I want to see my daughter, who is hundreds of kilometres away, with the 5G I will be able to see her and talk to her in real time through a hologram”.

For its part, the Swedish multinational Ericsson, represented by Iván Rejón, Director of Strategy and Marketing, said that “the benefits offered by 5G in some activities are not offered by 4G or the Internet”, and highlighted the potential for monetization in new business models.

The connected car: with the user and his environment

Anna Martínez, head of Connectivity and Online Services at SEAT, gave a very graphic vision of what the car of the future, the automated car, will look like. Cleaner cities, with more transport options and fewer traffic jams will be a daily reality with the 5G. “Connecting the car to the environment” will be key to Smart Cities. 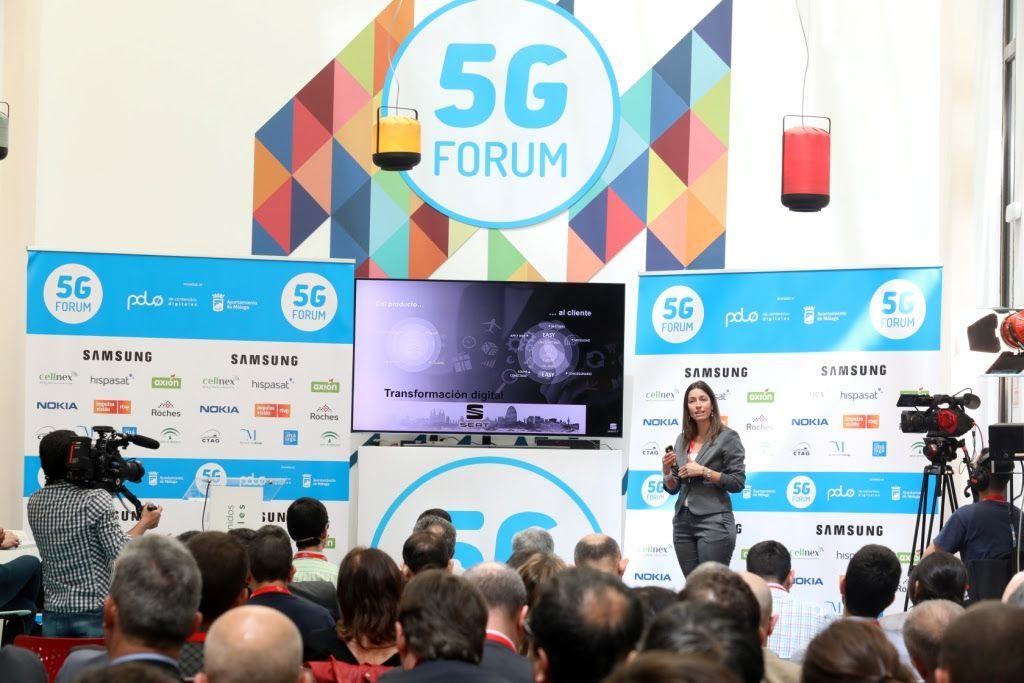 “In a few years we will be able to communicate with a vehicle with the voice”, announced the president of the Spanish Association of Connected Autonomous Vehicles (AEVAC), Aitor Fernandez, blind since the age of 14. Fernandez spoke of the potential of mobility in which the 5G is going to be “essential” and the “largest technology aggregator in history”. 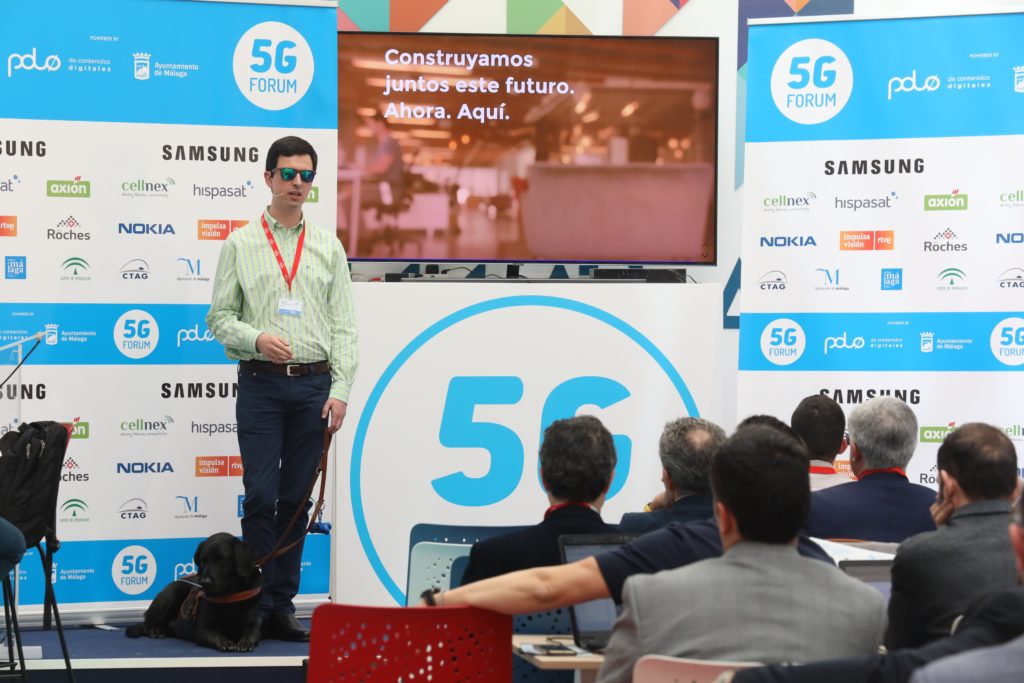 The Centro Tecnológico de Automoción de Galicia (CTAG) brought one of its connected cars to the 5GForum to show attendees all its features and how they work. Daniel Bernárdez, Head of the Connectivity Department of CTAG, compared through videos the different behaviours in compromised situations of two cars: one standard and the other connected. 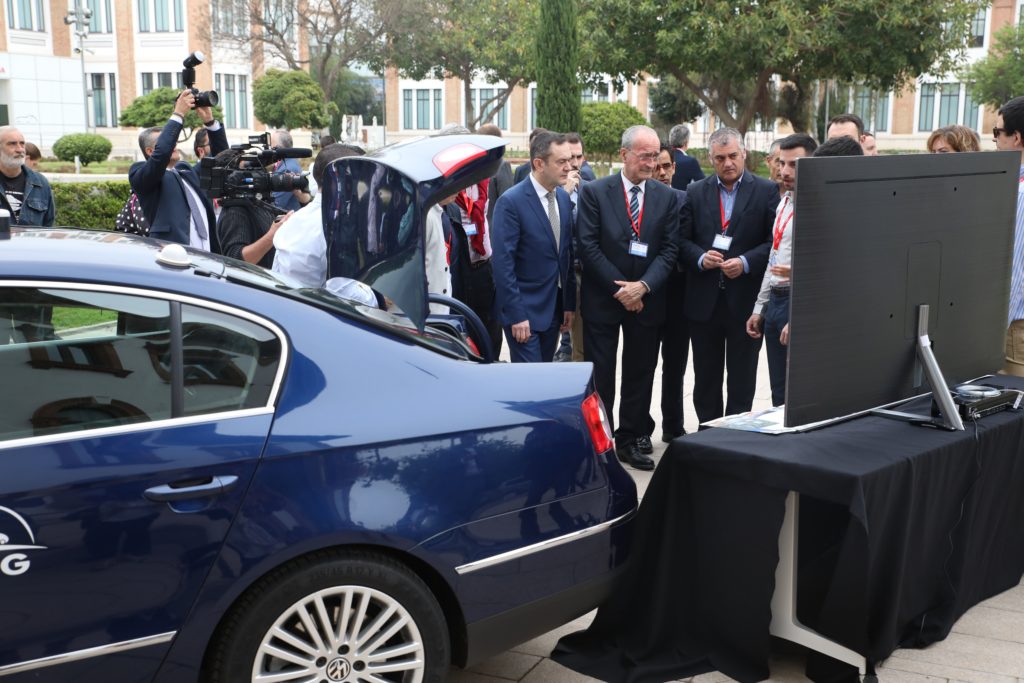 The 5G in America and in Tourism

José Otero, 5G Americas Director for Latin America and the Caribbean, participated by video call from Rio de Janeiro, where the 5G Americas annual convention was being held. Otero shared with the attendees the implementation of the Fifth Generation in the American continent and the business possibilities that open up for Spanish companies.

In addition, the CEO of Extenda, Vanessa Bernad, from Miami, transferred by videoconference the business opportunities that exist in the United States and Latin America for ICT companies.

Carlos Díez de la Lastra, CEO of Les Roches; Nicolás Barrios, Director of R+D+i of SEGITTUR; and Arturo Bernal, Manager of Tourism Costa del Sol, discussed in the panel dedicated to Tourism and Big Data about 5G and its applications in one of the main engines of the regional economy. User experience, information management and training of professionals in new technology were some of the keys that were aimed at designing an “intelligent tourist destination”. 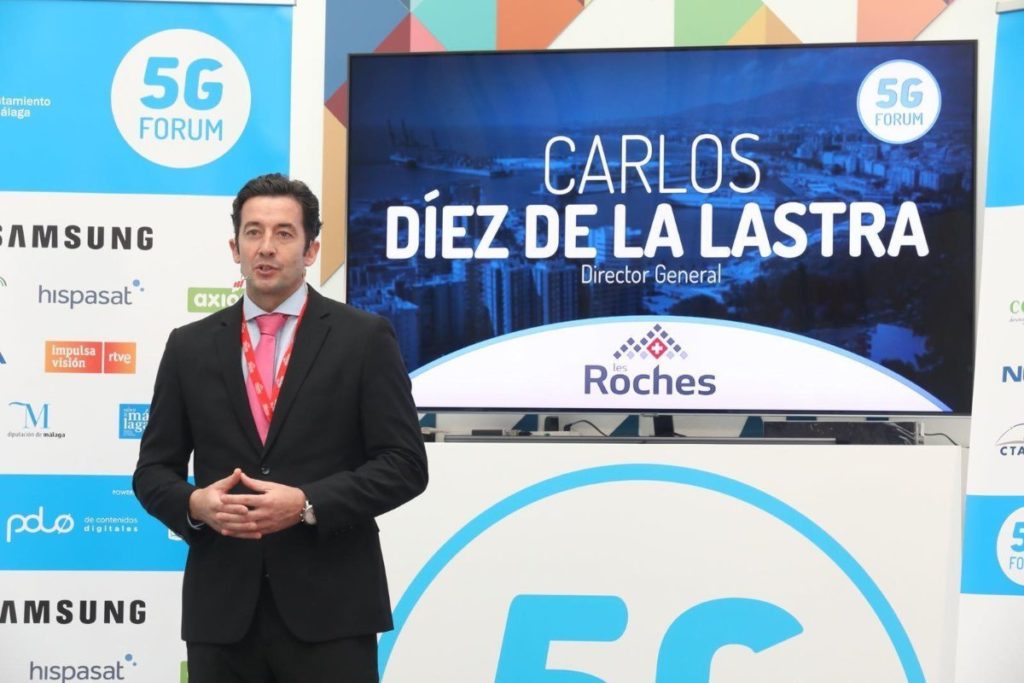 Juan Carlos Cabrera, Delegate for Mobility Safety and Major Festivals of the Seville City Council; and Rafael Pérez, Director of the CECOP, presented to the attendees the pilot experience that turned Seville into a Smart City last Easter. High definition cameras, adjustable intensity luminaires, transmission equipment for the connection of each of the devices or geolocation of the Brotherhoods were some of the innovations that were implemented to strengthen public safety.

Manuel Ortigosa, Director General of Telecommunications and Information Society of the Junta de Andalucía; Mario Cortés, Councillor for New Technologies in the Málaga City Council; and Baldomero León, Innovation Delegate in the Marbella City Council, spoke about Smart Cities. The public institutions agree that Smart Cities will be those that bet on improving the lives of citizens and, at the same time, on sustainability. 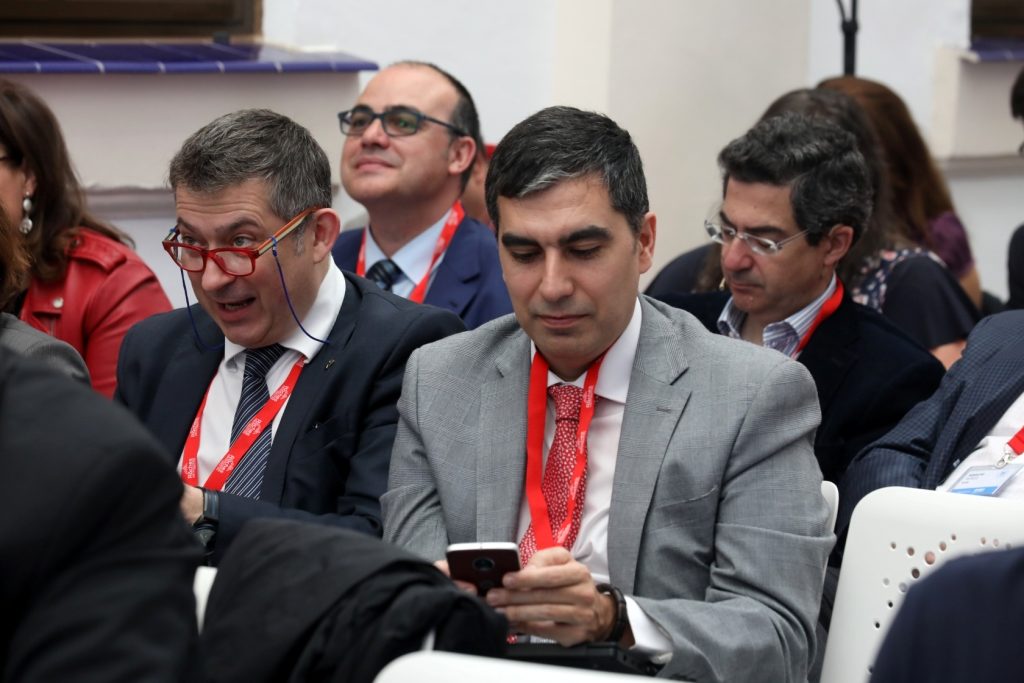 The Ministry of Energy, Tourism and Digital Agenda, through its advisor Pedro Alonso, advanced to the attendees the news of the publication in the BOE of the new National Frequency Attribution Chart, as an extension of the National 5G Plan. The news revolutionized the Auditorium of the 5GForum and the attendees began to share it with their corporate headquarters. And they took advantage of the presence of Pedro Alonso to have first hand information.

The 5G and its advantages in telemedicine

The 5GForum also covered the application of 5G Technology in emergency services. Samur, from Madrid City Council, presented its project “Smart T-shirt” or Smart Shirt. This “Intelligent T-shirt” measures the heart rhythm by means of sensors that warn an ambulance in the event of an arrhythmia, by means of a mobile phone using Bluetooth, and in turn communicates the ambulance warning to the nearest or most convenient hospital for the patient, without the need to go through a command and control centre. 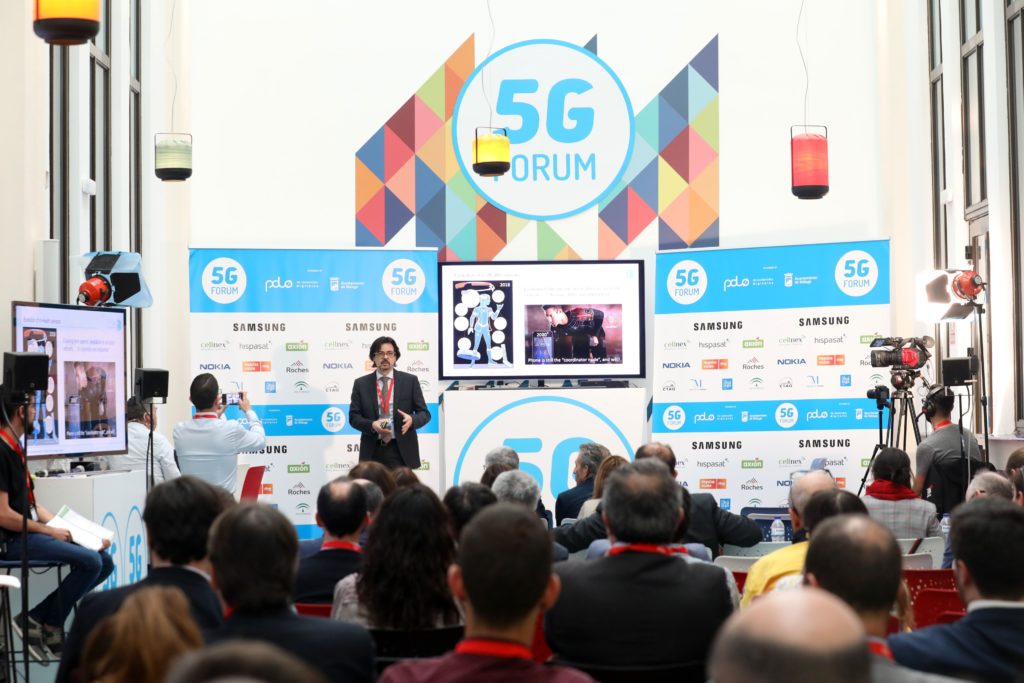 Narcís Cardona, Professor at the Polytechnic University of Valencia (UPV), exposed the possibility of being able to perform surgeries remotely from anywhere in the world thanks to the 5G.

Pere Vila, Director of Technological Strategy and Digital Innovation of RTVE, explained the impact that the 5G will have in the integral process of the transmission of the news. Vila spoke of a new model of journalism based on the edition of content using cloud services, immediate publication and interactivity when sharing it. 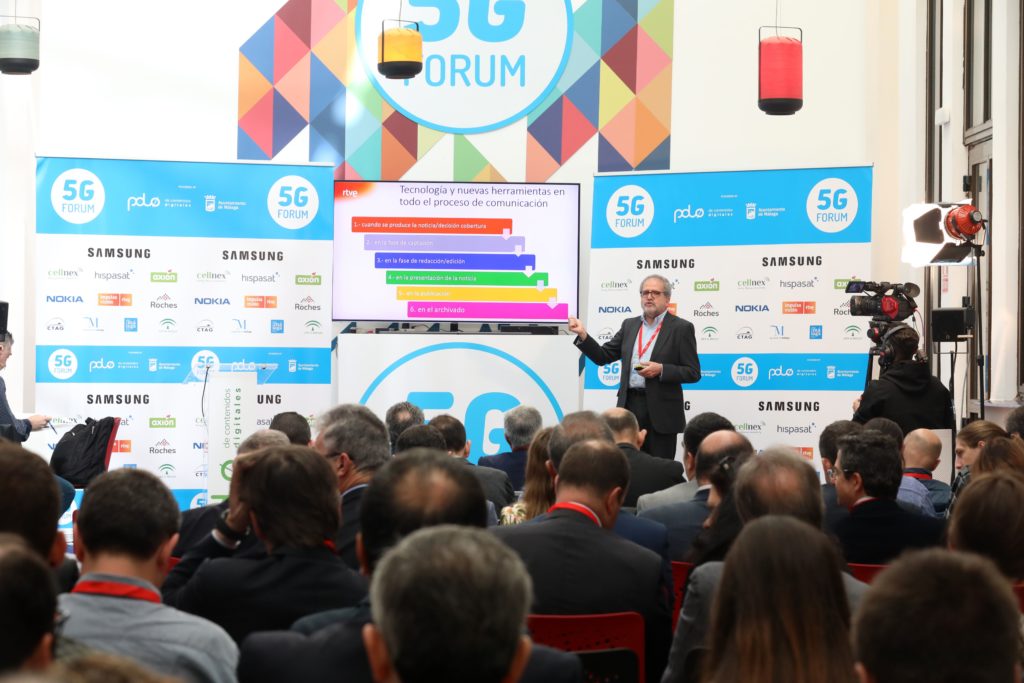 The Indian multinational Onmobile, under the guidance of Juan Olivares, Director of VAS and Business Development for Europe, exposed its commitment to video games on the mobile as a great source of revenue for companies in the sector.

Universities at the forefront of 5G technology

Raquel Barco, Vice-Chancellor Smart-Campus of the University of Malaga, and several of the UMA researchers explained the different projects, such as ONE5G, in which UMA, together with European private companies, is involved in developing technological solutions around 5G.

Narcís Cardona, Professor at the Polytechnic University of Valencia, also tackled the European 5G-XCAST project, highlighting the standardisation of content distribution in 5G mobile networks to large user groups and with multiple use cases.

In addition, the Polytechnic University of Madrid, represented by Professor José Manuel Menéndez, and RTVE, with Adolfo Muñoz, explained the advances in remote production and virtualization of live events with 5G networks.

Finally, at the closing of the 5GForum, Ricardo Medina, CEO of Medina Media, the audiovisual production company organizing the meeting, announced the dates of the next edition of the 5GForum: April 24 and 25, 2019, at the Digital Content Hub in Malaga.