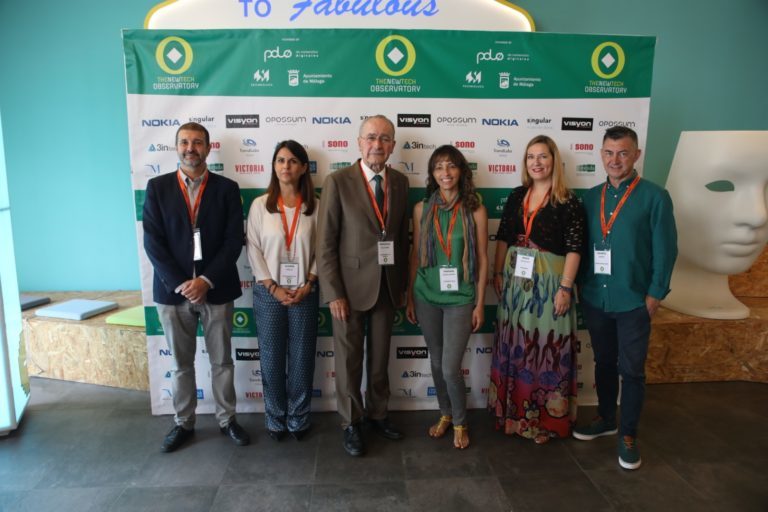 NEW TECHNOLOGIES IN TELEVISIONS, MEDICINE AND MUSEUMS ON THE OPENING DAY OF THE OBSERVATORY OF MALAGA

The III Edition of the New Tech Observatory of Malaga started on the morning of July 17 with the presence of the mayor of Malaga, Francisco de la Torre, who opened the meeting accompanied by the Councillor Delegate for Innovation and Urban Digitalization, Susana Carillo.

For two days, July 17 and 18, the Digital Content Hub of Malaga once again becomes the hub of new technologies such as Virtual Reality, Augmented Reality, Artificial Intelligence, 360, eSports, and so on.

After the salutation of the mayor began the keynotes, in which participate more than 25 experts from leading companies in New Technologies and 25 demos of Virtual Reality, Augmented Reality and Video Games that the companies participating in the event expose in the Demo Area of the Observatory.

The Executive Director of IHS Markit, María Rua Aguete, has been in charge of initiating the turn of keynotes. In her speech, she explained that “consumer habits have changed, the television market has changed, consumer habits have also changed”. María Rua analysed the role of the consumer and the audiovisual market at a global level.

After María Rua’s keynote, it was the turn of Mariana Acuña Acosta, co-founder and Chief Product Officer of Glassbox Technologies, who explained what new products are being developed in Silicon Valley. “Real-time technology is changing the way content is made, consumed and interacted with. “Thanks to Machine Learning, what used to be done in months is now done in days or weeks”, said Mariana Acuña.

For his part, Miguel Churruca, director of Marketing and Communication at Brainstorm, has opened the thematic block dedicated to televisions. During his speech, he explained the changes that are taking place in television news and in the retransmission of events thanks to New Technologies. 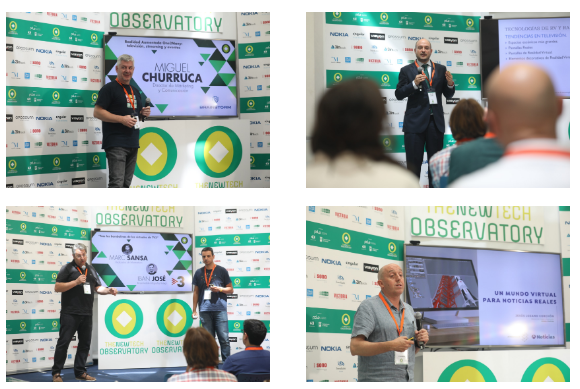 Víctor Sánchez, Technical Director of TVE, has focused on the use of VR and AR applied to the world of broadcasting, which has experienced a great boom in recent years. In addition, Victor Sanchez, spoke about the market solutions that are implemented today in the audiovisual sector. Finally, Sánchez spoke about the paradigm shift related to the TV workflow, thanks to the use of devices such as mobile phones, viewers…, the irruption of 5G and the integration of IA.

Marc Sansa, News Producer, and Ibán José, Head of Virtual Infography in TV3, explained how they use Augmented Reality in their news.

Finally, Jesús Lozano, director of Image and Realisation of Antena 3 Noticias (AtresMedia), presented different audiovisual contents in which the channel has used Augmented Reality and 3D for its news programmes and for other programmes such as “El Tiempo”.

To put an end to the morning of the opening day, those attending the Observatory enjoyed a cocktail “Networking Lunch” thanks to the Diputación de Málaga and Sabor a Málaga “El Sabor que nos une”. 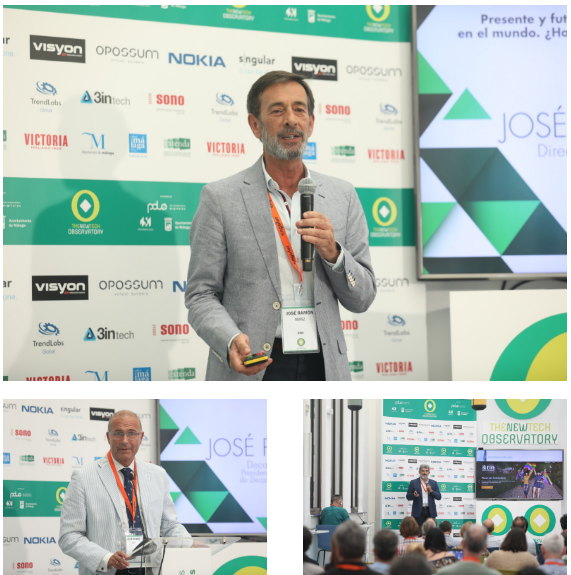 The keynotes continued in the afternoon with the block dedicated to New Technologies and Medicine, in which José Pablo Lara, Dean of the Faculty of Medicine of the University of Málaga (UMA), Dr. José Ramón Núñez, Director of the Transplant Programme of the World Health Organisation (WHO), and Francisco Sendra, professor at the Faculty of Medicine of the UMA, took part.

After this block of keynotes, 3IN-Tech presented, together with Mecenas 2.0, Feeel and Krill Audio, the virtualisation project of Room 39 of the Prado Museum, “El gabinete de descanso de sus Majestades los Reyes”, which will be shared on the Guadalinfo Network from September with the aim of bringing culture to everyone.

Continuing with the keynotes dedicated to museums, Francesc Sabata from Sono, showed the virtualization projects through large interactive screens that the company has made for the National Museum of Qatar, as well as the lighting work “LED wall” of more than 40 square meters.

Ignasi Marcet, director of Exhibit at Lavinia Next, and Alberto Marín, Value Driver of Minsait, a company by Indra, closed the first day of the New Tech Observatory, which ended with a “Happy Hour” offered by Cervezas Victoria of Malaga.